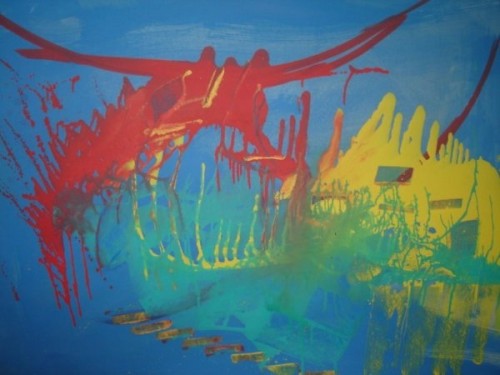 The days go by, I talk to Lucas (not a doctor, because he has yet to acquire his doctorate) and nothing changes. He remains shrewd and takes himself to be lord of the truth, and to him, letting me out of Pinel Clinic was totally out of the question. But there is a whole world out there waiting for me, I feel the need to get out and dissolve into the human masses that await me on the outside, in the urban chaos. But no, they still want to lock me away. I know it’s because they won’t stand for the truths that I dare to say and the ideas that I dare to think. They are beyond what these men in white can comprehend. But as long as I have you there on the other side, you, I don’t know who or to whom I write, on my side I can keep myself orientated. I remember the music. Music was my refuge on that trip. It was me, the music and my writing on that bus I took from Juiz de Fora headed for Belo Horizonte. But it would not be a simple jaunt, or a direct one. Inside my head, that trip expanded in time and space. No trip is larger than that stretch between Juiz de Fora – BH because it was going through my mind. On that bus, the time-bomb that I had become blew up altogether.

My father, Marquinhos and Tatiana embarked that bus together with me. Many people insist on telling me that they were not there. But I am sure of it. To me, at that time, they were there. I heard them whispering into my ears, telling me to calm down, calling me, repressing me. Not her though. She would never repress me, she always welcomed me with her tender words. The other two voices seemed to haunt me. They were the orchestrators of that trip, the voices had taken control over the bus and the bus driver. I couldn’t drink coffee anymore, or smoke, my mind was a mile a minute. The bus pulled out and fortunately I had two chairs all to myself to be alone and settle in with. The voices began to bother me, they spoke too loudly, they wanted to manipulate me, to manipulate the trip. I knew they wouldn’t let me leave Juiz de Fora, they were trying ever since that ticket window to stop me. But they wouldn’t succeed. I tried not to listen to them. But they were troubling me. So I decided to walk along the bus aisle, trying to find out where the owners of the voices were hiding. They were so vile, hiding in order to try and stop me! I had to find them. So at this point I was walking around the bus, back and forth, protected by my sunglasses, listening to my music on my PSP, shielding me from people who were there, continuing to search for where those voices were coming from.

The trip went on, but only for a short time. The bus stopped at the bus depot, everyone was asked to descend. I didn’t want to. It was just another stage set, to try and prevent my escape from Juiz de Fora. If I came out, I wouldn’t be able to get back on the bus, I would be left there until someone rescued me. The voices laughed at me while I sat, tucked into the seat, listening to Zeca Baleiro. In the end they persuaded me to come out, I walked around the bus depot, smoking one cigarette after the other. I am sure that I went back to the exact same bus, that they had not changed a single part. I succeeded in tricking them, and secured my trip back to BH. I even thought that I had gotten my dad and the others following him off my tail, the ones who would not stop tormenting my mind. But no, a short time later I felt it all again. They chased me, laughing. They wouldn’t let me be, asking for me to come back, they thought I was ridicules. When I really wanted to hide from them, I went into the bathroom.

This was the safe place, where I could stay long enough to feel better, to stop hearing. Not the music, which was always a refuge. I wanted to stop and feel, stop and think. My brain was compressing into my skullcap, it felt like too many ideas and feelings were overflowing. I would not have been surprised if my brain started oozing out through my ears. Anything would have been better than what I was feeling. I went back to the bathroom feeling calmer, catching my breath. It was all tiring me out, but I could not slow myself down. “Slow down your minds”, the rate of my thoughts dictated the music as Zeca Baleiro jumped to Pink Floyd and then to Led Zepellin. As the Floyd song goes “The lunatics were in my head”.

It was then that I discovered my pressure valve, the only way to express myself, to lay out my inner maelstrom, to transfer off the weight of the avalanche falling upon me; my writing. In the middle of the trip, to a psychedelic soundtrack, I turned on my laptop and started writing. Not just writing but reading too, I wanted everyone to know what I knew, so that they could help me end that sham of a trip, so that they could help me get back to BH, so they would be on my side.  I wrote, read, recited, screamed and laughed at the voices of those who threatened me. The catharsis was made complete. But this bothered every person on the bus, and the bus attendant wanted to restrain me. He asked me to stop screaming, I didn’t pay attention to him. He had challenged my lordship over me; he wanted to impose a desired behavior onto me. I said to him in a good loud tone: screw off, I do what I want. We started to argue, and things may have gotten a little heated. I don’t remember. I know that my PSP disappeared on one of my trips to the bathroom and when I returned to my seat, there it was again. It was said that I arrived in BH with a swollen face. Maybe the attendant acted aggressively. I can’t remember. I don’t know why I can’t remember. Lucas doesn’t know how to explain it to me, my mom can’t either. My dad was there, but he says that he wasn’t. How could he have not been? I heard his voice inside of me, resounding in me to the point where I couldn’t bear to hear it anymore.

Finally, after the catharsis of the writing-recitation, I fell asleep. Here are some of the words that sprung from the heart onto the paper while on that stretch of road, it seemed never ending:

Life is easier and more peaceful for the happy. That’s why happiness circles me like a low flying sparrow. Low but close. Always close, trying to reach me but without ever actually touching. Happiness is always around us. There’s no use trying to hide from it. It is impossible. It always wants us and we want it. But it will never come unless we go after it. It only comes when we want it to. And that’s what life is. Comings and goings. Arrivals and departures. But we always go on… forward, this must be the truth. Though we walk in direction of the uncertain. Without bearings, lost. Without fathers, mothers, men, mulattos, blacks, whites, yellows.  We walk without direction, in direction of the infinite, I allow for the pleonasm here because it is impossible to not commit it. The end of life, or the end of everything, is always our fear. Loneliness, we always become sad at the thought of leaving this life or the next. This is what we were taught. Unfortunately we have to leave this one for an even better one. Or worse. Or not. Or yes. Life is always this way. Sad and content. Dialectic in terms, but practical in life.

It is this way because we were made to love, everyone and each other, without fear of suffering or to hurt, unafraid to do what we want, not caring for the standards and what society tells us to. This is a fact. (…). We’re made by parents and their offspring, made from tension, horniness. HORNINESS. That is what we want. That is what we live for. Money, what for? We can walk, think, sing, play, not play, or simply be alone with ourselves. Loneliness is something distressing, I’m not going to lie to you. But unfortunately it is only by ourselves that we resolve our problems. I remember Guimarães Rosa, “to harvest we stay together but the weeding is done alone.” No one can ever help us, because we are just one man, or one woman. Or we are this entire thing put together, or separate, I don’t know. We are made from dust and to dust we will return. Are we happy or sad? It’s up to us. Pardon the buzzword, but that’s how life works. If I know anything about it, as I am just a young man, a young person just like anyone else except not knowing what road to take. That’s why I say; do what you want, for it is all in the law, another buzzword. After that, if you die, my dear reader, if it is that you exist, we will be happy. Where? Anywhere but here. Where am I, how am I, how do I go about things.  But these are just ramblings of a pseudo-poet, false morality, attempted teacher, half baked historian. But anyway, do what thou wish and be happy. (…) Why?

If God exists he lives inside of our hearts. And it is up to you alone to find Him, in the way that you please. Everyone says what they think. (…) Life really is tough. It’s up to us to choose. Live or suffer. I prefer to live being happy, when I can. When I want to. When I need to. When being sad is no use. Life is one big theater in which we are all actors. Actors of the Divine Human Comedy, where Dante doesn’t exist, unless we want him to. It all depends on one person. You. Me? I’m not anybody. As my namesake Gabriel Pensador would say, who is called and thinks himself to be a Thinker “I am a beggar, stodgy, indigent, indolent, a vagabond. I am the rest of the world.” And you, what do you do to change your world? Do you create mermaids and imaginary creatures or do you simply do nothing. If you manage to do one of them, then I simply admire you. Because what mortal would want to work hard seven days a week and still have to write these sad pages to blow off steam about a problem as common as this in other people’s lives.  Anyway man, that’s part of life. Live it intensely every millionth of a second, and especially since it goes by so fast as this bus driver who doesn’t stop the bus for anything. Ho boy…”

I went to sleep, and when I opened my eyes, thinking for a moment that I was back in Juiz de Fora, we arrived in BH. The endless bus trip was over and I continued another inner trip that would take me in Pinel’s direction.