Reflections of a Celibate 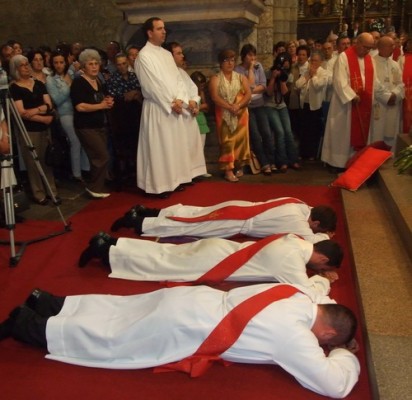 Allow me to share with you dear reader, this reflection from my experience lived in a priestly ministry. As I now arrive at the 50th year of my existence, 20 of which were dedicated to the church, I see how remarkable this experience of priestly life has been to my existential life. After these two decades spent in the church’s magisterium, I have come to the conclusion that to apply one’s self in God received vocation is the greatest grace that the Lord of Life may expound a Being in human fragility.  I also arrive at the conclusion that, in my capacity as an ordained minister, even amidst life’s challenges, tumults and crisis, I cannot dispense the duty to increasingly become a model of chaste life in pursuit of Holiness, the example given by the Lord of lords. I come to the conclusion that, under no circumstances, do I have the right to disappoint the people whose pastoral care was entrusted to me, whether in a moral sense, in church or in society, through my vow of fidelity to my magisterium and to the Gospel of Jesus Resurrected.

In my priestly life I have always sought to do my best while remaining ever aware of my own imperfections and limitations. Although not always agreeable with all the standards and rules of the magisterium of the church, I have strived to be respectful and loyal to its mandates, especially to what it says regarding a disciplined life of celibacy. In all these years of priestly life, many were held in crises, much criticism was received and many were the challenges faced, but the joys experienced in the work carried out were ever greater. Many sacraments were celebrated and marriages ministered. I witnessed many families come together, grow, progress and sacrament life in relationships rooted in profound love. I watched many couples grow happy, blessed in love and faithfulness. The testimony of these families is what makes me believe that a life lived in matrimony, in love and fidelity is just as sacred as life devoted to the magisterium of the church, which only holds meaning if also lived in love and faithfulness.

But I have also questioned: why are so many of us priests contradictory in our vocation? I ask because many ordained Beings live in moral and evangelical infidelity when they should be examples and models of love and fidelity. Which sin weighs heavier, to be unfaithful in moral behavior or unfaithful in the evangelic following and testimony? And when a person has no love for their own commitment undertaken? Why do so many lose the enthusiasm and festive joy of the day they were ordained? Why does the church ministry so often becomes an obligation? Why can’t the Beings ordained as priests also live life, fulfilled and happy in the practices of their ministry in a conjugal way, if this be their vocation as well? I only wish to make room for serious and responsible reflection regarding the option of free choice for ordained ministers. What I mean to defend in this article is celibacy as a choice of life. I defend the idea that the vocation for celibacy and priestly vocation are two distinct callings for the efforts of the magisterium. With that said, I would like to reflect on the urgent need to discuss the magisterium church’s level of problematic crisis and its connection to priestly vocation. I am suggesting dialogue instead of repression to new ideas that emerge in the course of time and history of our church. To exemplify let’s look at a few factual events: very recently, D. William Morris was seeking a solution to balance the scales between the deficit of vocations and the large geographic size and population of his diocese in Austria. He was ousted by the Vatican for defending what they considered to be extreme ideas, such as the ordination of women and married men. And let’s not forget the censure suffered by Friar Leonardo Boff, who was forbidden to write and speak, which led to the eventual resignation of his religious condition and demoted to a secular state, the only alternative left for him, a penalty suffered for defending innovative theological positions in the Church, including his defense of the view on celibacy as charisma. In 2009, Luis Albuquerque Couto, priest and federal Deputy of the State of Paraíba, in our own country, was suspended from his priestly activities due to a public interview published in the electronic magazine, Congresso em Foco, where the priest, among other subjects, declared: “celibates are a wealth to church life. Many celibates live an exemplary and inspirational life. Thus, it is not the celibate whom I call into question, but his obligational condition. When celibacy is imposed and obligated, it can bring about unnecessary human suffering. Celibacy accepted as charisma is blessed while mandatory and imposed celibacy may very well become silent martyrdom”. It is in this sense is that I maintain my belief that celibacy is also a vocation. The Apostle Paul teaches us: “celibacy is a gift from God, a vocation, which is not for everyone (…)”. For centuries throughout the history of the church, celibacy has always been imposed as the only conditional term to serve a position in a priestly ministry. Many of us Diocesan priests are devoted to the priesthood, but not necessarily to a celibate life. The examples found throughout the course of history show us that, when celibacy is in fact imposed and compulsory, it can bring unnecessary inner suffering. How many have lived or are still living this anguish in their priestly life? Mandatory and imposed celibacy, needless to say, does not always bring eternal happiness as promised by Creator to all His creatures.

I do not believe that the end to celibate life would bring an end to all problems related to human affection for those embodying them. This is not the issue. But I do think that optional choice would bring more freedom and consistency to a minister chosen by God, consecrated to the proclamation of the Good News of Jesus Christ. In this sense I wish to commune with the ideas of some of Brazil’s bishops, who do not hide their longings to one day see married priests or family priests alongside celibate ones, practicing together in the magisterium by self-vocation. This does not guarantee that the church will be immune to weakness, vacillations, sins and even scandals. However, we could then be sure that ministerial priesthood and celibacy would be exercised out of personal choice, and each member of the ecclesiastical body could live consistently performing their vocation, committed to the cause of the Kingdom of God within a Church preserved in fraternal solidarity.

I defend the free choice of celibacy and not its imposition! If the choice is for celibacy, I defend the idea that a priest should be authentic to the experience of his vow, not by leading a double life, but living it joyfully, without the need to sublimate all of his frustrations through alcoholism, homosexuality, pedophilia, in unbridled activism, or the neuroses of a bitter, avaricious and often spiteful existence. As the Apostle Paul said, “the first letter to the Corinthians: …if you cannot control yourselves, then you should marry, for it is better to marry than to burn with passion” (Ch. 7.9). A married priest, consistent in his vocation would possess greater exemplary worth than the “celibate” bachelor priests who do not assume their commitment to Be celibate and live unfaithful lives due to the lack of a sound psycho-affective structure, leading a life often marked by emotional imbalance, which may endanger the sons and daughters of many families and believers entrusted to the fidelity and holiness of the celibate man. In this sense, one of humanity’s great prophets, Dom Hélder Câmara, one day prayed thus: “I have told St. Peter that I dream of a church where celibacy is optional for priests and women to celebrate mass. A church free from the shackles of capitalism, where the oppressed may feel at home, encouraged in the pursuit of justice and peace and a way of living that reflects the true Gospel life”.

Finally dear reader, as Raul Seixas, the poet of the prophecies once said: “a dream that you dream alone is just a dream, but when we dream together, reality ensues”. May God enlighten the church so that it may reflect on the issue with proper depth and discernment. I reaffirm here my commitment as a Christian, as a priest and as a celibate in living my vocation to always seek perfection every day amidst the challenges of a priestly ministry of the contemporary world. One thing is for sure, I shall never forsake my faith and the ideals for which I have always fought for! I will continue to always defend my theological beliefs in a liberating perspective, in defense of life, dignity and social justice. “Thou art a priest for ever after the order of Melchizedek.” Psalms, 110.4; Hebrews, 7.17 and 5.6.