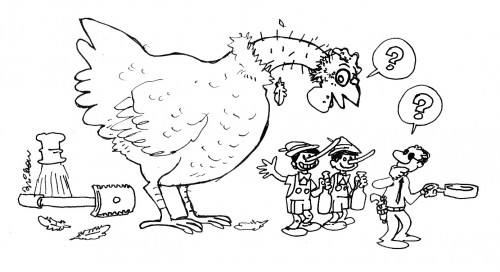 Joaquim Lacerda was the son of a political leader of the former National Democratic Union political party, UDN, who with his moralist speech was able to indulge in federal authority for 8 months during the brief tenure of Jânio Quadros in 1960. I will tell of a case involving him which occurred in the mid 60’s. He was a very humorous, jovial and boisterous man. He was married to Cotinha, who later became a hotel executive. They had six sons together, all very mischievous, and on her seventh delivery came the very beautiful, friendly and communicative Delza, who still lives there today with her beautiful children, as her parents had once dreamed of. Delza brought the joy of having a daughter, according to how our central character always told the story. The town’s on-hand gossipers said in passing that Joaquim Lacerda already had a daughter outside of the marriage, but were unable declare her as such.

Joaquim Lacerda constructed in the Centre of Pompéu in the mid 50’s the most beautiful house in the city, influencing the coming of others like it. The walls and ceilings were painted by Nilo, a whimsical artificer from Rio de Janeiro.

When Cotinha gave birth to Delza, Joaquim Lacerda, who by a rare fact was always called by his first and last name, forgot about the moralistic qualms of the UDN and moved from Pompeu to Belo Horizonte to meet Mr. Ademar de Barros, former State Governor of São Paulo by the PSD, Social Democratic Party, the great rival of UDN, to ask him to be the Godfather of the girl. It was traditional for politicians of the interior to ask big politicians from the capitals to baptize their children, but never from opposing parties.

The story that I came here to tell is about one of his antics in a period which, by the irony of fate, Joaquim Lacerda was a police delegate of Pompéu. At that time it was not necessary to be a Bachelor of Law to qualify for the position, and was also free of political appointment. Our central character shared his eccentricities with Simba and Dasinho, his first two sons who were made men by this time.

He was already separated conjugally from Cotinha and lived in a modest house on a dirt road in the town’s periphery. One Friday, a usually inviting day to the local bohemia, it had rained a lot and he wasn’t too excited about going out to the nearby bars and much less to the high class bars in the town center. He ordered his two sons at home to go out and buy half a dozen beers and “get” a chicken to cook up a savory galinhada. In the big cities, they make the so-called risotto, which is also chicken cooked in rice, but in no way can it be compared to galinhada. I clarify that what gives the special flavor to the galinhada is the way the galinha, chicken, is acquired; it has to be necessarily stolen from the yard of some inattentive neighbor.

The two diligent boys went out, passed by Peitudo (Hunky’s) Bar and grabbed a good amount of cold beers. By the time they got home, they remembered the chicken that father had asked them to get. What now?! In all this mud, where were they going to steal–or better, appropriate–a chicken at that hour of approaching night fall?

They remembered father’s chicken coop in the backyard where he maintained a strategic reserve just for those occasions when he could not rely on his boys to get the chicken by the traditional method. But they needed to use some ruse in order to convince father that they had gotten the bird from another yard. Simba, his real name is Delmar, who the last time I saw him was then a married gentleman, serious and respected of, told me that it was he who struck upon the idea. Very carefully, they plucked the feathers off the chicken’s neck, one that father kept for fattening up, for it to be unrecognizable.

They set off, confident and well prepared in their explanations in case of father’s distrust, put the beers down and were already sharpening the kitchen knife to cut the cock’s neck when Joaquim Lacerda interfered, “No, we’re not going to kill this one. I’m crazy about raising naked neck chickens. It was a lucky find, this cock, now we can breed its race. Let it go in the chicken coop and grab one of mine instead.”