Folia de Reis in my memory 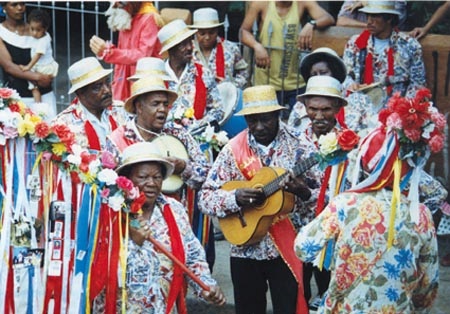 In our small town of Pompéu, when I was a child, around 1950, from the 24th of December, Christmas Eve, to the 6th of January, or King’s day, there was always a group of folias, revelers, singers and instrumentalists who roamed from one location to another on long walks, chanting or sometimes disenchanting verses relative to the Three Wise Kings’visit to Baby Jesus. It reflects a profane-religious aspect of Brazil and is part of our cycle of Christmas and New Year’s celebrations.

The representation of the Wise Kings, although I could not distinguished one from the other at the time, brought to my mind the presence, still clear to this day, of the nativity scene or crèches fashioned within the church and in the homes of many families, where you would find the representational statuettes of the Wise Kings underneath a star made of silver glitter paper.

The legends were many. It was said that the leader of the folia could not discontinue the activities unless a heir of his, a son, son-in-law, or brother for example, proceed with the mission. If the tradition were to be broken, the leader would die the following year. A so-called Mr. Cirino and two or three other examples were cited by the town’s people who had died for having abandoned the tradition. They made certain that whoever became a reveler one year would be obligated to continue for the following seven years in a row.

Another tradition stated that those who do not give alms to the Folia de Reis, King’s Revelry, ended up having a great loss in property assets the following year. At home, my mother and older brothers would arbitrarily support these intimidations, justifying the exercise of this “religious” tradition and our obligation to well receive the folia by offering alms and gifts.

Joe Barber, who I think is still alive, was a good folia leader. His home was at the high end of the town outskirts called Vargem do Boi, Ox Valley, which is where that lively bunch would set off. Most of the constituents were unfamiliar people. The folia leader attracted and gathered simple folk, some unemployed, other self-employed working men like Vital Batata — a slippery customer he was — all very keen on dividing the “pot” or alms they had received for the presentations, besides all the free food and drink they received during those days.

After the chief’s instructions and a small rehearsal, especially for the entrances and lines to be said at the precise moments, they set off early, starting with nearby homes. The folia carried on throughout the night in long walks, holding the “flag” high up front, a banner decorated with simple and colorful religious motifs, which demanded particularly special respect from those placed in charge of it. The flag in itself conveys many signs and meanings and is the foremost symbol of the folia. 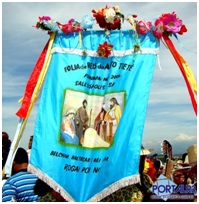 They went door to door seeking offerings which varied from a plate of food to a simple cup of coffee. A little cachaça, hard sugar cane alcohol, could be quietly served. Most families, when receiving the Folia de Reis in their homes offered things to eat – cakes, candies and even some snacks – and, on more rare occasions, presents such as chicken, sausages, eggs, some fruit or some cereals put in a paper bags.

They would come up to the front door and begin singing. The lyrics besought the “good heart” in the religious sense and there was always a supporting performer in clown attire wearing a mask or painted face to help raise donations. Despite the adaptations made to the different cultural types and settings from whence the revelers came and where the folia was taken from, the verses, rhythms and melodies crossed over entire generations and held the same meanings.

In more bountiful years you could count on all or nearly all musical instruments for a good folia, which strictly speaking should include viola, guitar, accordion, güiro, maracas, cavaquinho, pandeiro, and triangle. They improvised maraca-like instruments out of bottle caps pierced with wire. They performed dances that simulated close combat between each other, beating hard staffs against each other that when crossed provoke piercing clacks. 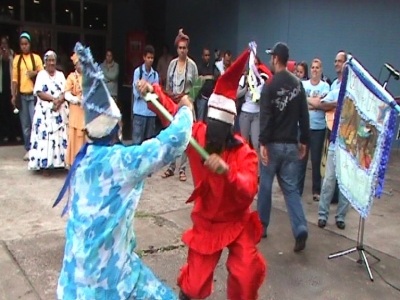 If the house being visited had a cement or grass yard, a dance was performed called lundu where one or two of the participants rolled down on the ground and jumped up in agile and almost artistic leaps. Curiously, however, and at the time it seemed quite normal, that almost everyone danced barefoot. One time I saw a reveler wearing rawhide sandals, which will never leave my memory. Their clothes were bright colored with satin pants and shirts which was generally a sharp contrast to the town’s poverty if not to the black skin of most of the revelers themselves.

For most of the people being visited, they were all just revelers. No one cared to identify the characters. The only one that stood out differently was the leader of the revelry, who as I recall of Joe Barber, who played an accordion, in his last years, presented himself with a very simple faded red shell accordion. What interested us was the rowdiness, the singing, the dancing and the jigs. 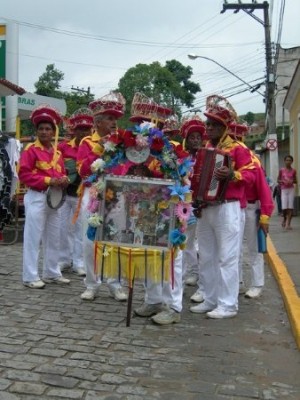 Good times. The revelry knew how to recognize their audience and remained within their social and territorial limits. Although my family lived in poor conditions, they were well respected culturally and intellectually. With enthusiasm and joy, my father sent to invite them to come to our house and perform on our brick laid yard under the veranda or in the living room when it was raining. We all loved to hear the songs.

After the revelry passed, my brothers and I got together with some other boys from the neighborhood and fabricated our masks and instruments. I still remember a little red haired boy named Jose Lucio who had a great knack for dancing and rapping with broomsticks which we used as fighting instruments. On a few occasions, we chanced to perform in some neighboring friends’ houses. We earned some pocket change and something to eat. Despite my rationality for modern day to day life, the rare beauty of this festivity still remains in my memory.

To this day I actually still remember and even unthinkingly sing a few verses from these parties which I believe have been preserved from generation to generation by oral tradition. (“The Holy Kings are coming to visit, who is good-hearted, God gives eternal glory in his happy mansion”)

Folia de Reis, still remains alive in the folklore manifestations in many regions around the country, especially in the towns of the region of Bocaiuva, state of Minas Gerais.

In the municipality of Muqui, state of Espírito Santo, the largest national meeting of Folia de Reis has been held since 1950, gathering almost a hundred different groups of revelers as well as others from the neighboring states of Rio de Janeiro, Minas Gerais and São Paulo. Some verses: