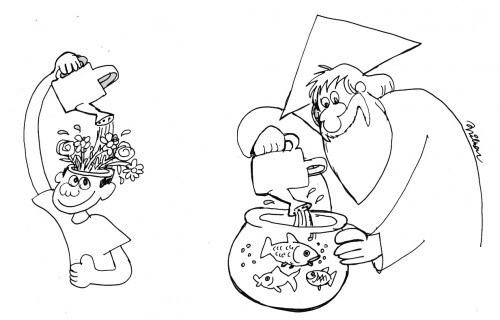 Do not hold on too tightly, squeeze, or smother because once you tie a knot, it will not be a bond anymore.

Modesty is vanity hidden behind the backdoor.

I want a map of the clouds and a very sluggish boat.

The longing that hurts the deepest and most irremediably is the longing of ourselves.

Eternal is everything that lasts a fraction of a second, but with such intensity that it petrifies, and no force will ever recover it…

Indifference is the most polished way of ignoring someone.

Only children and very old people know the pleasure of living day to day, hour to hour, and their hopes are short lived.

Hope is a vulture painted green.

A smile enriches the receivers without ever impoverishing the givers.

Indulgence is the most polished way of disregarding someone.

Indifference is the most refined form of politeness.

Real courage consists in simply not caring about the opinions of others.But what a cost to pay!

To dream is to wake up on the inside.

The right answer matters nothing: the essential thing is asking the right questions.

When someone asks what an author meant to say, it is because one of the two is dumb.

He who yearns only for glorydoes not deserve it.

The real illiterates are those who have learned to read and do not.

As for the little fishes in the aquarium, God is the one who changes their water.

The good thing about our fondest memories is that they are generally false. If I were to actually believe in everything that I think, I’d go crazy.

Most people live upon conviction and not ideas.

In the end we end up discovering that even our imagination has a roof, and a very low one at that.

The sad part about life paths is that they may never go where they were meant to. There are lost illusions that are so beautiful that we see them part like colored balloons that slip from our hands and disappear into the sky.

Only that which is lost is ours forever.

The only things that are eternal are the clouds.

Life is the duty that we took home to do.

A curve in the road, anonymous, can sometimes be the most memorable part of an entire trip around the world!

Plant your own garden and decorate your soul instead of waiting for someone to bring you flowers!

Sad are those who do not keep any vestige of childhood.

It is the steps that make the paths.

The most annoying people are the questionative ones. I prefer the discursive or narrative annoying person that you can hear yourself thinking about other things…

If I could, I would take the pain and put in an envelope and return it to the sender.

Who – in me – makes this interrogation?

Children do not play at playing, they play for real.

It’s not everyone that succeeds in carrying out their old childhood dreams.

The dream world is as silent as the world under sea. That’s why it’s good to dream.

Don’t avoid doing something you like due to lack of time, because the only thing lacking will be that time which, unfortunately, will never come back.

One day we discover that despite having lived almost a century that it wasn’t enough time to achieve all of our dreams, to say everything that has to be said…

A lie is a truth that forgot to happen.

I live in myself. Never mind that the room is small. It’s good, this way I have fewer places to lose my stuff in.

The best part about a fright is waiting for it.

You seek perfection? Don’t be vulgar. Authenticity is much harder.

Never give me Heaven… I want to dream of it in the unquiet happiness of purgatory.

Blind is he who does not see his neighbor die of cold, of hunger, of misery. Deaf is he who has no time to hear a friend blow of some steam, or a brother’s appeal.

The ellipses are the first three steps to the thinking that you go on walking yourpathon your own.

Of Good and Evil

Deep down, there are no good or bad people. There are only those who take pleasure in doing good and those who delight in doing evil. It is all lust…

From an English author of the late nineteenth century: A true gentleman always buys three copies of each book: one for reading, one for storing on his book shelf and the other to give away.

I wonder why the howling of wolves, thunder, and lightning constitute the backdrop for scenes in horror movies. For when fear is great, the soul is taken in silence. And nothing else exists.

No, the worst tragedy is not the sudden, quick, immediately definitive fall that can be attributed to divine punishment… But that which drags on daily, deafly like drizzling rain.

When someone slanders you

Who knows what could be

If he had said the truth…

Do not fret, for as much as they have done to you…

Study, coldly, the hearts of others.

And thus you shall make of this evil which they intend for you,

Your most kind and subtle pleasure…

How to forgive your enemies

And it is more convenient, in summary.

Do not pardon, however, for just anything,

For they know what they do…

Interior peace, if you want to attain it,

Do not leave anything incomplete or put off for later.

There is nothing that gives us a more restful sleep

But to the heart

Who smears honey all over is,

Licked by the bears.

I want to always have a smile upon my face,

Even when the given situation is not at all cheerful…

And that this smile of mine may transmit peace

Of the taste of things:

For as rare as it may be,

Only one wine is duly excellent:

The one you drink calmly

And most silent friend…

Here’s a problem! And to it every wise man applies

But the problem is the ones who profit off this,

Who always have a few more leads to follow…

Of the eternal search:

Only the restless desire, non-passing

Brings enchantment to the object of desire…

And we end up disdaining the hunt

Out of the crazy adventure of hunting