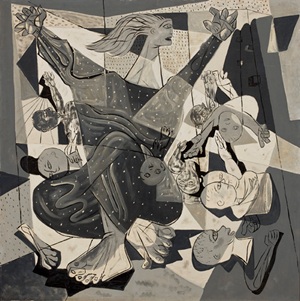 There I was, still feeling all that aphasia, that detachment from the real world where everything seemed meaningless and shallow. I felt the lack of love. Love, which I projected on only two women in my life, unaware of how love is spread all over the world, in all beings imaginable and unimaginable. But then one day I made the decision. Yes, to put an end to that useless existence of a being who lived on watching TV with his back facing the screen, didn’t read, didn’t speak to anyone, didn’t interact. I decided that day, as I sat on my bedroom window sill, staring into the dark immensity of ground zero at the foot of the building.

To commit suicide, to take one’s own life is an act that requires a lot of courage. I wondered how far my consciousness would last. I thought about all my bits and pieces scattered over the ground. I thought of my desolate family. But it was the only way out that I could see at that moment. I wanted to separate myself from this body; to stop feeling the pains of the soul and of the heart. I left messages for each of my family members saved on my computer, to console their hearts after the impending act. I wasn’t afraid, because to me, life had already come to an end, my friend. I felt compassion, for the ones who would stay in this life, carrying the weight of the trauma of a promising young man’s suicide on their backs. I stared at the ground and saw the infinite, imagining what would happen if my soul detached from my body, if I would go to some  kind of limbo, or straight to hell… Was there a hell worse than the non-life I was leading?

In an almost alchemical flash of an instant my heart awakened just before I shot myself through that window. Love awakened in my being, through the figure of a boy. My younger brother, he didn’t deserve to live with this cross hanging over his back. And oh how I loved him. I didn’t want to abandon him, much less in such a violent way.

And so I shot one last glance from my window at ground level down below before going back into my room, my own personal universe. If someone asked me today: why are you alive? I would answer: it was brotherly love that saved me that day. If my ties with the world, friends, family and everything else were undone, there was still a fine but deep string of love that prevented me from undoing the miracle of life. Am I thankful? You bet I am! I am eternally grateful for the opportunity to continue my journey, my experiences.

I think it was at this point that my depression took a turn for the better. I stopped accepting it as domineering and reassumed my role as an active person. The process was slow and it included vain attempts of reconciliation with my incessant musings, but gradually my heart was opening, and I was leaving the past in its place, projecting new paths for the future. But what paths?

My friend, I was totally out of ideas. I was out of a job, since they would not accept me back at UFMG University where I worked for four years as an assistant researcher. I had a master’s degree to finish. Without knowing how, I had totally distanced myself from all my friends; zero social life. It was like my life was a newly reformatted computer. Now it was time to reprogram it with data and projects. Fear, there was none. After looking death in the eye face to face, I feared nothing. This was my great triumph in the battle for renewal.

It all sounds easy, reading these words, but it was hard. I don’t know how I got out of the depression, but I know it started once I went into action. I got a new job selling books and slowly life began to flow again.

But be careful companheiro, the men in white are still out there, and our love and joy are still running ongoing risk. I say this because I just revisited those memories, two days after a new hospital stay of almost a month. We’ll get to the path that led me there, but I leave a warning. We, the “mad,” “crazies,” argonauts, are a minority that is generally mediocrisized by the hypocrisy of the mainstream scientific-rationale. But the journey continues and the day-to-day battle is constant.