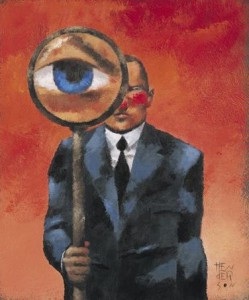 Regarding crazies and doctors, or maybe just crazy-doctors, I have one thing to say: it is all a question of representation. Today, while this occurred to me, and considering that I still remain imprisoned here, I realized that for me to get out, I have to play the game. We have to immerse into it in order to change it, to turn it inside out and crudely expose our unique rationale, our vision of a differentiated world. The men in white and family members are definitely not ready to experiment the mind expansion which we have gone and still go through. I discovered after today’s meeting with Dr. Lucas and my poor mother that I can play their game, that I will get out of here and be able to proclaim my truths to the four corners of the world. In reality, there is a whole universe out there calling out to me, not with torturing voices, but with the support that I feel, inside, in my soul and my heart. Shortly you will understand all this upheaval, because this isn’t the first time that they lock me up, but not just yet.

Seeing my girlfriend was disastrous. I had hoped for affection, the warmth of a loved one, and to not need Tatiana’s council anymore, whose voice tormented me even in my sleep. The opposite happened: an emotional discharge. I spilled everything onto her and the voices got even stronger. It was devastating for me, and with my luck, it looked like she would abandon me. How could this be? Couldn’t she see that she was in a position to help me, to calm me down? No, she couldn’t see! Our vision is limited by our own horizons of experience. I felt like I was in a Pink Floyd song: shining like a crazy diamond, or the Doors; breaking on through to the other side. But no one saw my shine, no one came over to the other side with me, to the mental expansion that I was having. I was repressed and recriminated inside of my own home. My bedroom, my universe become my world, which at times was torture. I craved the world, and had only a bedroom. I wanted all of the women who I had left behind, from Rio to BH, Sandra, Tatiana, my girlfriend. I had isolation. I came to be considered a threat for wanting freedom, wanting the streets and the people at any cost. For every threat, there is always a psychiatrist.

Another flash came through my mind. It’s an obscure period for me, nonlinear, chaotic, many conflicting feelings go through my mind while I’m here writing in Pinel. The road that led me here was direct, but the events… so disobjective, so fragmented, escaping through the meanders of my memories. It’s as if I have been erased. It’s possibly those damned ‘sane’ meds. Hard drugs, marketed as promising solutions, while only creating masses of amorphous, lethargic, and addicted people. Laboratorial lobotomy, that’s what it is.

Oh how I needed to get out, it wasn’t a desire, but a necessity, to be guided by voices in the midst of multitudes. A psychiatrist should take care of me? Crazy? How dare you say this to your own son! I raved. If you don’t understand me, if you have a limited vision, don’t label me as crazy! Don’t categorize me in your classifications, your standards, let me gain the wings of perception and fly high, higher than anyone has ever flown before!

I felt overridden, the world remained split in two poles: one embodied by my family, my mother being the main character, conservative and repressive; the other the homo world, of the voices that guided me, comprehending and helping, despite wearing me out a lot. These poles were not dialectic, they were conflicting, without a resulting synthesis. And I felt the burden of carrying them alone, I felt as Drummond must have.

“I have only two hands

And the feeling of the world,

I am full of slaves,

My memories are flowing

When I rise, the sky

Will be dead and plundered,

Dead will be my desire, dead

The swamp without chords”

In the midst of so much sentiment, so much desire, so much life, they wanted me to go to the damn psychiatrist. I don’t know how, but they managed to take me there. I only know that I protested, cursed and kicked all the way there. How? How could a pseudo-scientist who has never experienced what I was going through possibly know the answers? Life is not bound in books alone, but in experience. This character was a gloomy older bald man, in his analyst posture, a terrifying look gleaming in his eyes. The more he challenged me, the more I instilled my own immoderation, the more I wanted to contradict him. He wanted to show me the lack of logic in my rationale. Logic? Want something more illogical than me sitting here, listening to these absurds pseudo-psychics, while the world outside is calling out to me…? While there are great loves waiting to be lived, poems to be written, songs to be composed? What measure of craziness is there in that? Crazy is leading this mediocre life of yours, thinking you’re the lord of truth, medicating patients who go on to live only for the sake of living, numb and emotionless! If you do not hear the voices, you do not know that my dad is close by, I do hear him, I know it. Why should your shallow objective truth impinge on mine which is winged, creative and limitless? No, your psychic tactics will not mediocritize me. No, I will not take your damned medications. No, I will not come back to this place. You and your psychiatry can go to h… The world awaits me, and I await it.