XIX – Flashes In Between Rounds of Card Games 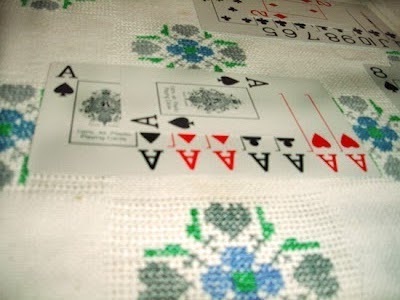 As I tell of my arrival in Pinel, I still find myself being held captive in this sympathetic mental health clinic, amidst Sandras, Valérias, Daniéis, Moniques, Fernandas and many other travel companions. They come and go. I myself have been let out on the outside and have come back, and I have no idea when I’ll ever get out again. The only thing left for me is to write, it is the only way to not let the revolutionary potential inside of me die down, my peaceful resistance to the medication, the utmost expression of myself. Writing is not an option, it is a necessity.

Like another necessity I had, how foolish! –to understand what I was going through, to fit into patterns, to know what type of crazy person I was: psychotic, maniac, manic depressive, or schizophrenic. We all have this necessity. We are not satisfied to just be, we have to fit in, to be categorized. In my conversations with Lucas, the big-man in white, I always needed to know. In the end, it is totally unacceptable to be locked away without any attestation for insanity. I deserved to at least know the causa trancafiatis. The answers were always evasive, like someone always seeking the non-spoken in the inner-spoken. The lapses. Later on I learned about the DSM – IV, a kind of catalogue of all mental disorders, to ‘facilitate’ psychiatric diagnosis. What a load of crap. I fit the description of many and none at the same time. I was a walking paradox, with a mind that saw beyond. And this was bothersome. Not even here on the inside were they able to handle me. Sarcastically, ironically, I would challenge the psychiatric field of knowledge. Dig up Freud, bring in Lacan, call Yung, there is no way to insert me into their standards. The universe of subjectivity; never will the pseudo-scientific diagnostics be reduced. Insanity is only a step away from genius, or is genius one step away from insanity? Or are they both the same ballpark? The mental health clinics do not have this answer, nor are they ready for this question.

Causes, we always need to know the causes. I am reminded of the trip to Rio, Sandra, Sophia; the name of knowledge, and all the pulsating desires. Juiz de Fora, Tatiana, my dad, Marquinhos, me blowing my lid. The trip back, the reencounter with my family, with my girlfriend. Flashes lacking connection. There is no causality, there is no linearity. There is just a constellation of illogical feelings, pulsating, seething. If one wanted to find a cause, we could regress to my childhood traümes (which ones? who knows!) or a biological-chemical explanation. Or neither. Probably for the best. But there is always an unspoken fact to follow up on which can help weave the feelings. I remember myself, before Juiz de Fora, before Rio, before coming here to Pinel. Some say that’s where it all began. I don’t believe in beginnings, or middles, or ends. They are all ties created at our own whim.

It was a Saturday during Carnaval. I was still in BH getting ready to go to a nearby ranch. I was with my girlfriend, yes it was her, and we went back to the house to grab a few last things. I stopped the car any-which-way in the garage, I meant to change the music on the stereo and go upstairs quickly so that we could leave, but the eagerness of passion that overtook us as we got out of the car led us directly to the bedroom. In the time between, between kisses and smothering embraces, my phone rang. My brother, the oldest, had just arrived and was blocked from parking in the garage. He demanded, his voice somewhat exalted, that I come down and park properly, a typical exhalation and demonstration of the haughtiness of the sane, perhaps due to the stupidity inherent in human selfishness.

I regained my composure and when I opened the door, the elevator in front of me opened as well. He came out outpouring his anger amid insults and accusations. I got pissed off right away and a lot of swearing and accusations ensued. Maybe it as the first time I had ever yelled back at him.  We clashed head-on, and it wasn’t pretty. We descended in the elevator, exchanging the most preposterous words, our testosterone being expressed through words. My impulse was to instill a punch squarely in his face and end the argument once and for all. I held myself back, maybe out of brotherly love. But the impulse to throw a punch transformed into words as violent as any act. Blood went rushing rapidly up my head, I felt course through my veins every word that was ill spoken and ill heard. Both our girlfriends stood looking on that scene, static, eyes bulging, like people watching the epic quarrel of Cain and Abel. I got back in the car infuriated. I wanted to get out of the car, yell more, to strike him, to punch him out. She held me back. I pulled out of the garage burning rubber, without knowing where to go, rage transpiring from me.

I stopped at the first gas station on the corner of our street. I cried copiously. Tears and more tears followed by ranting and unintelligible, undecipherable words which were always followed by sweet words from my companion. Nothing calmed me. Anger transmuted into deception, into sorrow, into suffering. I would not go back to that house while he was there. I would never share the same roof again. It was time for me to go my own way, it was time for me to leave the cocoon.

But there was still one more night before Carnaval. Not even a river of tears could heal that avalanche of paradoxical feelings. Would it ever heal? I decided to drop my girlfriend off at home. It was time to immerse into myself. To be alone. I left her and went on my way, without knowing what way that would be.

Any palpable causation? Some bridge that took me from a pre-Carnaval family quarrel to Pinel? No. Stray paths are not straight, simple, or direct. But a lot was still to happen that night. Very objective facts, indelible marks. The uncontrollable drive that would open the world in my mind… Feelings really are dangerous. For now I should get back together with my friends for another round of cards in sympathetic captivity.