II – The Meanders of Remembrance 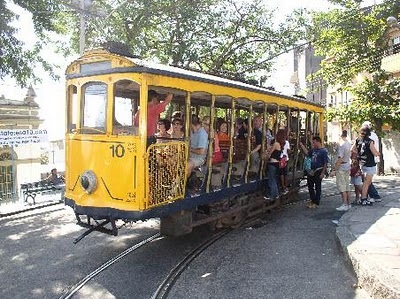 By the time I was 23 I had already graduated in history the year before and was working on my master’s degree. It was exactly this master’s degree that led me to taking the trip to Rio de Janeiro. At the time I also worked in a research project for the university and so, tallying my research interests with the needs of this project, I decided to go to Rio de Janeiro.

This city has always captivated me. It is ambiguous and paradoxical with its natural beauties and extravagant social inequalities. I had been to Rio on a few occasions, one time while staying with friends in Copacabana, the other was for the historical Rolling Stones show on the beach and returning right after, and another still was for work, for a presentation at PUC-Rio where I stayed in the Center, next to Lapa. All of these trips were brief and I hadn’t had the chance to get to know the ins and outs of the city, its entrenches. Maybe it’s because every time I came accompanied with my friends. I have always been a person encircled by friends and knowing that they would not abandon me in this clinic without seeing them made my heart warm. But let’s get back to the fateful trip.

This time I would travel alone. I already had a very good experience of traveling solo while on another research mission in Ceará. It’s when we travel alone that we learn to get to know, and live with, ourselves. The discipline necessary to research without having a boss around, the liberty to organize your own time schedules. Liberty because you have the money needed and can define how and what to spend it on. It’s a really capitalist definition of a word so beautiful and meaning so fading. Liberty has become commonplace, without really understanding its essential meaning. When you are admitted, this all becomes very clear.

The initial plan was to stay a week in the Marvelous City of Rio. Maybe it wouldn’t be enough to dig up everything that was necessary on both researches, but it was the amount of time that the money I had would allow me to stay for. I went by bus, always that same strange trip there, sitting beside an unknown person. But with my books and music I always carried myself well. Where there are words there is no loneliness. Total loneliness is the absence of words. I’ve always had a soundtrack for the moments of my life. Then I met the one who would compose the great soundtrack of my life: Vinicius de Moraes. My relationship with this poet goes beyond mere words strung together. It’s as though I had known him all along, as if he was counseling me, comforting me, like a drinking companion. He certainly did accompany me while I was admitted and still advises me of what words to use.

Vinicius, Rio, longings, passion. A deliciously explosive combination. The longings were for my girlfriend at the time. We had been together for a few months now since we met at a Congress assembly, an overpowering and intense love. We got involved together with impressive speed. But this was, or still is? one of my chief characteristics. To be impassionate with the world, a hurried manner to live everything intensely before it all ends, the habit of open heartedly delivering myself to people. It’s a poetic way of existence. Exaggerate, Cazuza would say. But aren’t the good things in life found exactly within exaggerations? I discovered that even with them, a dose of moderation is necessary.

So I arrived in Rio and went straight to the hostel where I would stay in the most charming bohemian neighborhood located in Santa Tereza. The hostel was an enormous house, very old. I rang the doorbell, but as it was only six o’clock in the morning, no one answered. I hung around, sat on a stone bench and scribbled some initial thoughts from the trip. After about half an hour, playing PSP and writing, I struck the doorbell again and an odd looking fellow appeared to answer the door. Darci had a large figure and he struck me as a beatnik lost in time and space for that city. We had a small initial conversation, I checked in, and went up to the room. To reach it we had to go up a wooden spiral staircase, the kind that made those creaking sounds typical of old houses. A large bedroom with three bunk beds and a bathroom, two spaces, it was empty. I would stay in that immense room alone. In fact, there was only one English couple staying there, and they were leaving on the day of my arrival. There I was to stay, along with Darci, the two housekeepers, Sandra, the owner and her daughter. I will tell you about them later.

After this first incursion, I took a shower, the temperature was above thirty-five degrees Celsius. I had some fruit and a cup of coffee then went off to my first research location, the Academia Brasileira de Literatura de Cordel was a small walk through Santa Tereza on rua Leopoldo Fróes. Wedged at the foot of a mountain, it is very pleasant to walk in this neighborhood, full of lakes and with those pleasant and nostalgic railcar tracks, which subside there until today.

When I arrived the Academy was closed. Since I had been there about a year before, I knew that the poet, Gonçalo Ferreira, President of ABLC lived in a house right up the street. I rang the doorbell a few times, but since my attempts were futile, I decided to return to the hostel. I had a few doses of coffee and decided to go out in search of another research item that would take me to Rio de Janeiro. It was about the left wing during the time of the military regime, the organizations, some leaders, I had to find some document, discover someone who knows of images of them. I had already organized a research map, with instructions to where I should go. At the hostel I had one more talk in passing with Darci and he gave me the coordinates of the metro railway and for the next destination, Botafogo, where the city’s Public Archives is.

I know that I prey too much on detail, but it’s to understand the incomprehensible, the details have their dose of importance. Each one of them could have helped to compose the trauma that brought me to this clinic. I strain to remember the events entirely, but I know that I am bound to forget something important. The important thing is not in my conscious mind but in the subconscious. It is within the meanders of remembrance that the clues remain for me to comprehend and understand the situation that I find myself in.