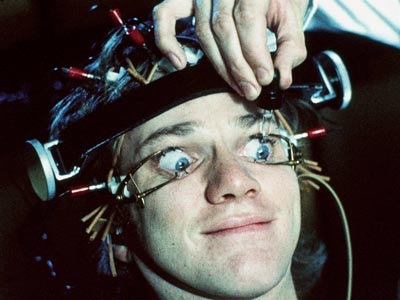 There is nothing more to say about the dull monotony of my jail days in this mental health clinic. Not the guitar, not even having met Fernanda, not anything appeases the pain of being… Because the pain is not of being or existing, but from being unable to fully exist, of living like a bird with clipped wings and chains round its feet. Not to mention the barred cage preventing even the slightest attempt of taking flight. Pinel is my cage. I need to fly, I need to get out before I am fully incorporated in the lobotomy logic of this place, before I become just another ghost wandering the corridors with glazed eyes, unfeeling, soulless, without desire, waiting for the electro-shock therapy.

One of my inside friends, the young Thiago, is becoming one of them. He’s gone mute and lately he just sits there all shriveled up in the courtyard. I met him through his girlfriend, Sandra. He used to be good guy, conscious, critical, but he never adapted. He was diagnosed with chronic depression and so and so. His family couldn’t deal with him and so his fate, like mine, was to be locked away. After many different treatments, he started electro-convulsive therapy (a medical euphemism for electrocuting the patient in the head). The last time I saw him, he limited himself to saying, “only three more days ‘till the shock…” He claimed to feel much better after having electrical currents pass through his brain. He would go unseen for days and when he reappeared, he looked like a happy amoeba. This is the reigning logic in mental asylums: whether it’s by drugs, psychotropic drugs or electro-convulsive therapy, the “cure” is almost always synonymous with the bridling and castration of our autonomy. I couldn’t be incorporated, would not allow it.

I would find openings to play with my own madness and to clown around sometimes. Strategies of resistance against a psychiatrical dominance. They wanted to impose their truth onto me. I pretended to accept it, and resisted in my own ideals and principles. My worldview, my private universe and my living space are kept forever off limits to them.

I fight almost every day with the male nurses, mere thugs of the other men in white. I catch myself snickering at my own threats of invading the female wing, causing a general uproar. And I sometimes do trespass over, sit on the couch and watch TV with the captives. One of them, beautiful, with clear skin and dark hair, screams and cries non-stop. I just throw a look at her, not condemningly, but with the intent of gaining her confidence. While holding this gaze, I put myself on equal footing and her screaming stops. We don’t exchange words, nor do we need to, we just look at each other, she sits down and we watch TV together. Not that the TV in itself interests me. I am interested in steadily breaking the barriers of this prison and gaining the trust of my peers. The leadership that the male inmates now feel; them being systematically present in my room; confiding the ward’s internal gossip; supplying me with cigarettes, I am now beginning to build on the other side with the females. My biggest interest in getting over to the other side is still Fernanda. I can’t endure the emotional vacuum, the emptiness in my chest. My girlfriend seems to have gone, but Fernanda appeared.

We can’t always be together, she doesn’t always want to talk to me and I am not always able to invade the female wing, nor does she always look at me. No, she cannot be the solution. And that pains me. A pain without cure. Only freedom can avert me from succumbing and putrefying internally. Once again I gather my bags and sit down in front of the gate, the last obstacle between me and the street. This time I’ll remain here or there, irreducible, until my freedom is restored. And I won’t eat anymore either. It’s not a question of choice, it is a choice of life.

While I’m sitting here in my peaceful resistance, waiting for the light of freedom, I remember the more-than-bent angel, the genial Torquato Neto, who wrote in the year of 1970, while incarcerated in a madhouse like me:

“Everything remains. It remains stopped in the center of my speculations, and I don’t know if I have been able to untie myself from any of them. I’m dying. Once again I die buried in my perplexities – I do not know for what I am. And I let it go. It is necessary that I acquire conditions to survive. What is to survive? I have managed to survive up to now, but … what I live, what I write, what I can continue being are my assets. I do not have anything else. What I am kills me: on, and on, always: everything remains the same, the same old scheme to the end, the same cuckoo life, the same shit. Only God can save me, but I do not know God or where to look for him. I said that I am dying – once more. I only live for this”

And while I sit here on my suitcase, for hours on end in front of an iron gate, I am left with only one hope, sane although vain, that my last days of hardship not follow the same footsteps as Torquato’s.