Professor Bernardo Riedel comes from a Jewish family. His father, Mauricio Riedel was originally from Lodz, Poland and his mother, Paula Fuhrmann, from Kecskemét, Hungria. They came to Brazil in 1930 and after trying to live in Rio de Janeiro, which they found to be too hot, they went to São Paulo and after finding it to be too humid, they finally ended up settling with the suave climate of Belo Horizonte.
His grandparents on his mother’s side along with some of his uncles died in Nazi concentration camps, as did other relatives on his father’s side. His mother would tell stories of her parents’ penury and despair during the First World War when the Austro-Hungarian Empire was crushed by the French and English. His mother’s family moved to Lodz, Poland where she met her future husband. From there, where they felt the ever growing anti-Semitic feelings, they came to Brazil where they married and had seven children.
Professor Bernardo, the second child of seven, has a half-sister and a niece who live in Israel. In Belo Horizonte, he met Dona Elza, originally from Itambacuri where she studied in a nuns’ school. They married and had two children, Rafael and Sarita. Dona Elza converted to Judaism and today, aside from being the choir regent, is one of the main expounders for Belo Horizonte’s central Synagogue.
Due to family influence, Bernardo graduated in pharmacy and biochemistry at the Universidade Federal de Minas Gerais, UFMG, where he entered as a professor in 1970. But his passion has always been for astronomy and from 1977 to 1998 he worked as optical engineer for the Observatório Astronômico Frei Rosário, OAFR, located in the Sierra da Piedade region, in the county of Caeté, metropolitan region of Belo Horizonte, where he retired years later as director of the institute. 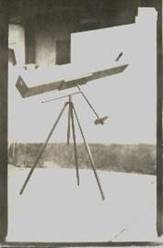 Inventing started early for Riedel. In 1953, at the age of thirteen, on a boy scouts camping trip, he fell in love with the night sky and constructed his first telescope, a square structure made from wood boxes.

Today, Professor Riedel is considered by the scientific community to be one of the leading Brazilian specialists in the fabrication of telescopes. His first wood box telescope was built in 1953, at this time he became associated with the Centro de Estudos Astronômicos de Minas Gerais (CEAMIG).

In 1978, he founded the B. Riedel Ciência e Técnica (B. Riedel Science and Craft), Belo Horizonte, which has the objective to build high quality astronomic instruments such as, telescopes, lenses, mirrors, filters, and diverse accessories related to astronomy.

Holder of cutting-edge technology and developer of diverse original techniques in the production of amateur telescopes and domes, Professor Bernardo Riedel is cordially nicknamed by the astrological community as the Brazilian Gyro Gearloose.

Participating in nearly every movement to promote and encourage astronomy in Belo Horizonte and Minas Gerais, which culminated with the creation of the Astronomic Observatory of Sierra da Piedade and the attempts to install the planetarium of BH.

In 1995, he began an implementation program for astronomical observatories in Brazil, producing five summits which today operate his telescopes. In Piauí there is an Astronomical Observatory named after him and he is also the Astronomy Club’s president of honor in Baturité, Ceará. He also participates in groups that are working on the restoration and maintenance of existing observatories throughout Brazil with the aim to keep them operational.

In his factory, the “B Riedel Ciência e Técnica Ltda”, located in Bairro Horto, Belo Horizonte, sophisticated telescopes are spawned by means of machines built from ice cream machine engines, pulleys from sewing machines, hydraulic mechanisms from dentist chairs, Auger axles from chicken roaster ovens, vacuum pumps from the American Air Force, copier belts and other assorted gizmos. His greatest pride is the vacuum chamber that was once a valve factory which RCA Victor kept in the Industrial City of Contagem until the 60’s. Before going through the vacuum chamber to be transformed into a telescope mirror, the lens is heated in an old pizza oven. 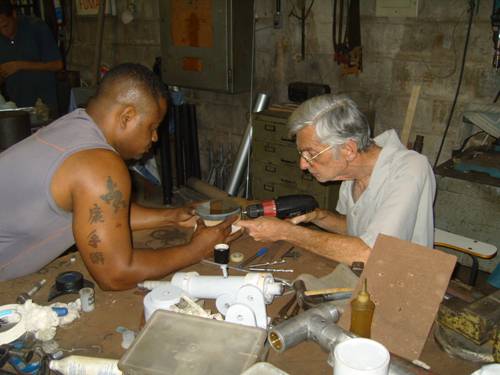 Argentine writer and poet Jorge Luís Borges once said that heaven must be very similar to a bookstore, where one’s imagination can run wild. Professor Bernardo Reidel’s opinion diverges. He thinks that heaven must be like a junk yard where we can find the treasures that he puts to work in his factory on Rua João Carlos.

The telescope that the professor fabricates is a type of reflector, it consists of a cylinder that has in its bottom end a convex or convergent mirror that, by means of a prism throws the light captured from the sky into a small lens affixed to the side of the tube, called an ocular lens, which has a small focus regulator, according to the distance of the observed object. Their cylinders vary from 90 cm to 2 ½ meters long and 10 to 25 cm in diameter, slightly larger than the mirrors themselves.

The professor affirms to have spent on these inventions all of the money from the sale of seven real estate properties. Today he has five employees and is preparing to assemble on top of the concrete slab roof of his building a celestial observation center open to the public. He has obtained the cooperation of Cemig Energy Co., which has installed a buffer so that the light posts in front of the factory do not blur the observation terrace. But one of the problems of his observatory is its proximity to the Independência Stadium. When there is a soccer game at night, the illumination from the Independência prevents astrological observation.

B. Riedel’s telescopes cost between 450 and 1700 USD, depending on their size, sophistication and accessories. Every year when the rainy season ends, he gathers a class of students who at the end usually end up ordering telescopes of their own. But what is most impressive are the immense and sophisticated domes, like the one he is just finishing now to build for a private observatory in Bragança Paulista,  state of São Paulo, which is 5 meters in diameter. 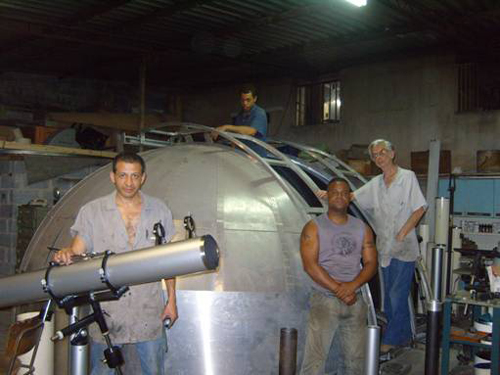 The bureaucracy and lack of resources, he complains, push the creative spirits out of the country. “In the American universities, an idea starts getting executed in one month’s time. Here, it takes years to get off the papers, if ever!” When there is opportunity, the professor complains, the lack of support that the entrepreneurs have in Brazil, and of course the lack of wisdom of monitoring government bodies, take a good chunk out of your time and working capital. He mentions that he has already been invited several times to go to Israel to work in the aeronautic industry, and says that if he were in China, he would have the facility to exit a state bank with a folder full of money to implement his investments.