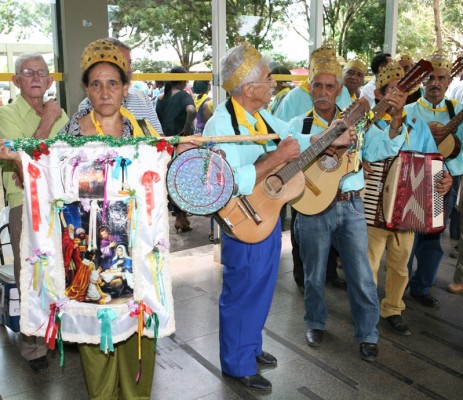 Folia de Reis (The Epiphany Festival) is a celebration of Portuguese origin closely linked to the Catholic celebration of Christmas, brought to Brazil in the early stages of the formation of Brazil’s cultural identity, and that still lives in the folklore of many regions around the country. The variations are many and differ even within one region. It is considered one of the liveliest parties in the country that mixes folklore, culture and religion. It begins on December 24, Christmas Eve, and continues on until February 2nd, although in most regions it ends on January 6th, Kings’ Day, dedicated to the three Magi: Melchior, Gaspar and Baltazar.

Folia de Reis is both the name of the festival and the name of the group of people that make up the procession. The Folia de Reis (literally meaning: the King’s Revelry) is composed of musicians playing instruments that are mostly home-made and handmade such as drums (box), reco-reco, flute and rabeca ( a type of rustic violin), ukulele, tambourine, maracas, triangle, in addition to the traditional viola and accordion, also known in some regions as a hurdy gurdy or pé-de-bode (goat’s foot).

The characters that make up the revelry are generally twelve people, all wearing very colorful clothes, and among them are the master and foreman, holders of knowledge surrounding the event as well as leaders of the other revelers, clowns and the three Magi.

The revelers, generally simple men of rural or inland areas, are the participants of the festival and uphold their majestic example through songs of faith. The revelers pay the promise to follow the revelry procession for seven consecutive years. Legend has it that those who do not fulfill this seven year period are punished, and usually die in some natural or accidental way at the end of the period they should have committed to.

Besides the musicians, instrumentalists and singers, the group often includes the telling of legends with focus on regional or local traditions with properly characterized folk figures. All are organized under the leadership of the Revelry Captain, a title which also varies according to the region. All reverently follow the flag, satisfying traditional rituals of unquestionable beauty and cultural richness.

A special organization for the voices, tones and counter-tones is conducted during the sung performances which lead to the formation of a choir that is very pleasing to the ear, though they often consist of unintelligible sounds. The entreaties to be paid, the receiving of alms and bidding farewell take place in the form of song at the front door of each house. The coordinators have different names in different regions. In some, the Master is attributed the special role to start the songs, which are carried out in verse and impromptu, entreating and giving thanks for donations received at each house they visit. The other constituents then repeat the verses, each in his or her voice, in the cadence previously set by the Master and accompanied by their musical instruments.

The songs always carry religious themes, in exception to those played during the revelers’ traditional breaks for dinner, lunch or rest, where they host lively parties with regional song and dance such as catira, moda de viola and cateretê. In my childhood I got to see some performances of a crude form of lundu that took place in the dances presented in the homes that welcomed the revelers.

Accompanying the sound of the musical instruments, revelers perform long walks carrying the “flag,” a banner made of wood, cloth and even cardboard decorated with religious motifs, which is tribute to special respect. The flag moves forward, gaining stanza in the world of popular music

The purpose of the revelry is not to bring gifts, as culture assigns to the Three Magician Kings, but to receive them (food, drink and alms) from households for philanthropic purposes, aside from, of course, the bountiful tables set with dinners and drinks that are offered to the revelers and devoured there on the spot.

In our house and in some of the neighboring homes, we would serve snacks for the people there and gave them some spare bucks to help out. But the really interesting part was the day after when the revelry kings marched by as we attempted to recite, in our own way, that choreographic and religious manifestation. We scrounged up some paint and painted crude masks with the lids of shoe boxes. Then we nailed some crushed bottle caps onto sticks or broom handles and danced awkwardly, acting out an exceedingly phony cateretê. We also imitated the beating of staffs in something that resembled maculelê. For two or three days of our holiday vacation, we became revelers and lived the purest joy. As for music, we kept to a melodic simplification that went more or less like this:

“Olé there inside, olé here outside, who in this house does reside.

Santos Reis asks for alms, but not needy to fulfill.

Santos Reis asks for alms to see who gives in good will.”

I would love to someday take my son to Bocaiúva for him to see an authentic festival that when original has a rare beauty and which was one of my happiest childhood memories. But I’m afraid that with all the government intervention, intellectuals and event promoters, this party has become too full of artifices intended to promote performances mainly for tourists.