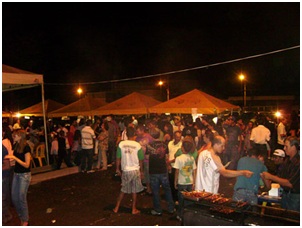 After the Three Kings Festival went by, reaching its peak on the 6th of January, we anxiously awaited the glorious Festival of Saint Sebastian. I was positively thrilled with everything, starting with the “invitations” to the party that we carefully took home and safeguarded. The entire town read that little piece of paper distributed on their way out of church on the last Sunday of the previous year.

What we called invitations were simple pamphlets announcing the activities of the previous week and the day of the festival which was usually held on the Sunday closest to January 20th. Most religious festivals alike all counted on the novena, which constituted in double form as preparation for the celebration itself.

The leaflets were usually printed on faded colored paper: blue, green, yellow, or pink. The titles had a different design at least and were highlighted in size.

Some traditions still remain to this day. Everything was well explained:

The Festival of Saint Sebastian

at the Center of Our Lady of the Conception in Pompeu

From 11 to 19 of January: novena in honor to San Sebastian.

Day 19 the night after the novena there will be confessions with the      partition of our beloved Priest Pedro L. George.

Day 20-Sunday at 5:00 in the morning, Dawning with the music of Lord Keith. Lighting of fireworks.

7:00 festive mass, with singing and fellowship.

10:00 auction, on the grounds next to the Church

6:00 pm, solemn mass with mast lifting and burning of fireworks.

7:00 pm, auction of gifts at the main entrance of the center trumpeted by Afonso Martins.

8:00 pm, Pavilion with band music, drinks and snacks served by the young ladies of the society.

During the month, the festeiros, or those sent on their behalf, roamed the farms and countryside asking for gifts, usually calves to be auctioned on the day of the festival. Even my father, who was no longer a farmer made a point of donating a calf he acquired from a close comrade of his. Depending on the fund raising ability of the priest or festeiro, the calf would be handpicked.

Father, a sworn atheist, dressed in one of his two or three greenish-brown dress suits and fighting against the asthma that had plagued him his entire life, slowly walked up to the church which was quite a long distance from our house. Momma never went out. If she ever did it would only be on Good Friday for the burial procession.

We put on our best clothing, I remember a pair of trousers of a curly fabric called tussore which we only used on special occasions and when I could be sure that the girls would all be looking at me.

The most religious families prepared gifts like giant cartridges filled with sweets made with peanuts and sugar, or reaped from the yard, in the garden or on the farm, a fruit or fruit bunch with some unusual aspect to offer for the auction. A simple pumpkin could trigger a real racket between the boasters attending to the auction. The important thing was to keep a good sense of humor.

The livestock auction was a more serious affair and it was quite common at this moment for those present to agree on auctioning in groups, in doubles or triples to facilitate the process. At this time the dialogue was kept dry and simple.

While the auction of donated gifts, as trumpeted by Afonso Martins, was mostly a time to joke around with the personalities there present by making references to their habits or unusual dispositions. A real “standup comedy” would ensue: “Something tells me that this fine package of roasted peanuts is for Tõezinho da Lapa, an adamant consumer of this product. And this cider jelly is for Nazarene who has his eye on a pretty lass; a package of sweet peanuts for Zé da Rocinha who is well known for his sweet tooth. Here we have a pair of wool slippers, surely bound for Ze Caecilius who doesn’t go out after seven… And now this almost four pound watermelon (in those days watermelons were a pound on average).” Laughter, jokes some funnier than others and the money came in clean to the parish.

The mini pavilion was built over top of a providential patch of grass to avoid raising dust. Leaning on those lopsided wood logs which served as a horizontal cross section to separate the rest of the space, made with coconut leaves which were also used on the roof, a whole gang of kids and I spent more than an hour or two there watching and listening to the band play. And what jovial maidens they were too. I remember Marta Clode, Miss Delaidinha, Dilce do Gonte, Zé Caecilius’ Yone, Zezinha da São and many others. Dresses with flowered aprons rushed in and out of the small room, also divided by coconut leaves, to serve the tables with beer cooled in large drums of water with a little ice and a lot of salt.

Very sleepily and with legs tired from standing up for hours on end, my brother Verlim, who never missed out a party, and I returned to our home in the distant neighborhood of d’os Cristos; tired, sleepy, but cheerful and happy. We were already dreaming of next year’s festival whose festeiros had already been announced in the pavilion: Lili do Xisto and Tuniquinho Afonso.