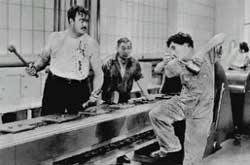 To a hungry man there is no humane form of food, only its abstract characteristic as food. It could just as well be in a more rudimentary form, and it is impossible to say in what manner this act of feeding would differ from that of animals. A needy man, full of worries, is incapable of admiring even the most beautiful of marvels.

Our assumption of work characterizes it as uniquely human. A spider conducts operations that resemble those of a weaver and a bee, while building their hives leave embarrassed many architects. But what distinguishes the worst architect from the best of bees is that the architect raises buildings in his mind before building them in reality. At the end of every working process, we arrive at a stage that already existed in the imagination of the worker before he even started.

Besides the effort of his bodily organs, the process requires that throughout the operation the worker remains aligned with his purpose. This means careful attention. The less he is attracted to the nature of his work and the way it is performed, the more attention he is obliged to pay, i.e. more wearing down of his physical and mental capacities.

In the manufacture of handicrafts, the employee makes use of a tool. In a factory the machine uses him. There the movements of the work instrument precede him; whereas here he has to follow the workings of the machine. In the factory, workers become mere appendages of a living mechanism, independent of them.

In mass industrial production, all processes to increase productivity of labor are employed at the expense of the individual worker. All means for the development of production are transformed into forms of domination and exploitation of the laborers, crippling the working man, reducing him to a fragment of a man, lowering him to the level of an appendage to the machine.

These techniques of management destroy all traces of his attraction to work and convert him into a bored tool, distant from the intellectual potentialities of the labor process, in the same proportion as science is in this amalgamation a power independent of him.

Industrial mass production does not just produce man as a commodity, the commodity-man, the man’s role as a utility. It produces to perfection a spiritually and physically dehumanized being, creating the demoralization, deformation and degradation of workers and capitalists. Its final product is a commodity with awareness and its own tricks….. The human merchandise!