Inside Each One of Us 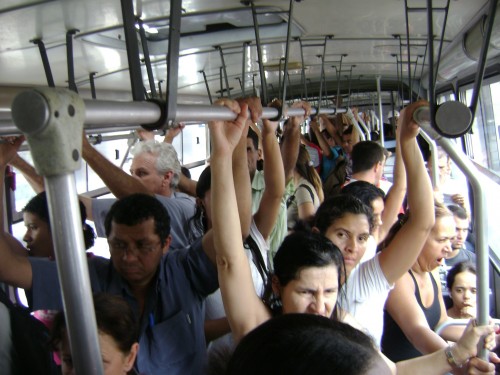 It’s a hot day. End of November. Everyone seems restless, irritated and in a hurry. So rushed! I take the bus and go from BH to Betim feeling tired from all the heat and daily routine, the tight hours, and running so many errands. The sky is loaded with grey clouds and pollution, the asphalt city, the high temperature, the stuffy air, the tense traffic. I’m riding this wave, but today I’ve got one lucky card: I got a seat on the bus so I don’t need to travel standing up like some of my other fellow passengers and travel companions. The seats in the front area of the bus, legally reserved for the elderly who do not pay bus fare and don’t need to cross the roulette, are all taken. I see several youths sitting in them. Some are napping, or pretending to while several elderly people stand in the aisle. That’s urban courtesy for you…

Then an elderly gentleman blows his top. “What ever happened to the laws? To people’s rights?! I am illiterate, but I have more of an upbringing than most college students and the rich and powerful to boot. Are they really so ignorant of our rights?” The man questions, demanding an attitude be taken from the bus clerk who claims to be unable to impose the law which reserves priority seats for the elderly and disabled. Then this senior citizen goes on about how tired he is of society and the way people treat each other nowadays. A good share of the passengers is sensitive to his complaint. A young man offers to pay the bus fare for him and come to the back of the bus so that he may take his seat. He doesn’t agree and continues his speech, spouting off his resentment. All the while, the people sitting in the reserved seats continue looking indifferent, untouched. When the senior reaches his destination, he is still standing on foot. I watch on listening and I too feel impotent in the face of the scene before me. I warmly remember my grandfather who at the age of eighty-five told me about an experience he had while using the city bus for going to the town center to buy groceries, pay bills and do business at the bank. Very well-mannered, elegant and endowed with rare delicacy and treatment to others, during one of these outings he was still on foot when the bus braked abruptly, causing him to lose his balance and fall to the floor.

He told me in such a way that I’ll never forget, his breath choking and troubled, how no one offered him a hand up back onto his feet. And as if that wasn’t enough,—and this is what marked him the most—when he rose his head he saw how several people were holding their hands over their mouths in laughter, laughing at his fall. Then he looked onward and said, “Yeah… this world just ain’t for me no more.”

The days pass by and we go on performing our roles and duties. In a never ending runaround, purely automatic at times, we all just chug along. But even though the body acts on mechanically, thoughts fly around and we feel, question, probe the meaning, like the song from my youth, “Pois é, pra quê?”

At home the other day, something happened that made me feel like the last straw had been drawn. “Leave my heart in peace ‘cause it’s a bottle up to here of…” I thought: ‘Stop the world, I want to get off.’

I was getting ready to get out the door, in a rush as always, when I get a call. The conversation started like so:

“Good morning! How are you? This is “your” bank speaking, this call is being recorded. Let me just confirm your data here sir. Do you have a moment?”

I always hold back on my first impulses when I get these types of telemarketing calls, acting upon a friend’s appeal who once had to work this job in order to pay his way through college and ended up sensitizing me with his stories about this difficult experience. And also because of my brother who compiled studies on the illnesses and stress linked to people in this line of work. And so, I always try to be well-mannered. Then I answered. “It just has to be quick because I am leaving for work right now.” He responded gently, “Sure thing! We have an offer for you.” As I’m listening I think to myself: ‘what could a bank have to offer me?’ As he began to speak, and I don’t know why, he stammered slightly as he asked the following question, “Do you have a dream?” I confess that the question caught me by surprise, but before I could answer he listed my possible answers: buy a car, refurbish my house, buy new properties, have some extra cash for parties and Christmas shopping… And without pause he went on. “You as our client could make your dream come true because we are making loans available to you with interests rates lower than any other in the market place…

At that moment I interrupted him. “Look, my dream is not to get stuck in debt. If we had time, we could talk about dreams. But we don’t have time. Thank you and goodbye.” I hung up.

I felt a tremendous impatience build up in me at that moment. I felt violated and disrespected. How could we, right as we “wake up” in the morning, be invaded like this in our own homes? Sure we’re all used to outdoors, even advertisements on public bathroom stalls and a daily visual pollution of messages that tell us to ease our weariness, and blow off our fears and anxieties by going shopping, consuming goods and all the things that on the market in order to increase our “happiness.” Is anyone else sick and tired of all this? It’s like we’re all stuck in a labyrinth and there are no windows or doors to get out of this roundabout that we are fenced into. And that’s what kept going through my mind that day.

And in the face of this pile of apparently disconnected facts, finally… a light at the end of the tunnel? …Two days later, following a suggestion given by friends on a social network, I watched the movie “Eu maior” (Higher Self) which brings forth a contemporary reflection on self-knowledge and the search for happiness through interviews with spiritual leaders, intellectuals, artists and sportsmen. And soon after, the movie “As leis do Sol,” which tells the story of the peoples of Earth and the Spiritual Beings.

So I calmed down and connected myself with the relativity of everything and the importance of new paradigms and viewpoints for the transmutation and changes to come in the world which all begins inside each one of us. It is like a “golden thread that links past, present and future…”

And my hope increased when I went to see, motivated by my oldest daughter’s participation in the organization of the IV National Infant-Juvenile Conference on Environment in Luziânia, near Brasilia, which presented a musical performance built by the children and youths there present, which I share below: