The Brazilian Autumn – Part 3 – The social, cultural and ecological revolution 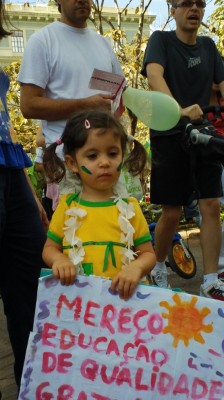 The Workers Party (PT) federal government, which now completes its tenth year, proudly announces the social rise of the poor population owing to large-scale provisions of grants, jobs and loans, thus providing greater access to consumer goods. The good side of this is that the previous government upheld policies which did not allow for such an upsurge while perpetuating an absurd degree of social inequality. The downside is that the current government has not offered any proposal that reaches anywhere beyond this. It is essential that basic human needs be provided for. This no one can dispute. But what are the plans for the future ahead of us? Rampant consumerism does not make anyone any happier and perpetuates the ongoing colonialism of large corporations. Children have the right to an education that challenges and awakens in them an interest for the world of knowledge. All issues are interlinked. HEALTH, for example is a broad topic and it implies much more than just medical services. Social equality is closely linked to culture and education, since these are founded upon altruistic and solidary values ​​and practices, antagonistic to greed, injustice and human exploitation. Our national priority should be the GNH (Gross National Happiness) in first place, above the GDP. Culture Brazil, a country and a nation demarcated by an imaginary line fabricated by whom? When? Enormous territorial challenges here are also being faced. The nature, the abundance. Water, land, sea, mountain ranges, rare and endangered animals. Forests, peoples, cultures, traditions, diversity, miscegenation. In what ways are we so alike alongside our hermanos Latino Americanos? Honored Africa, our mother. We are a people, aside from a country and a nation. We may be the abundant birthplace to welcome the new local, global and universal awareness. A network that extends, framing its purpose through dreams of peace in our heads and hearts. Ecology To sustain, sustainment, sustainability. Trendy terms, so important that they become trivialized like the word LOVE. Who among us has reflected on the importance of being ALIVE? To breathe, see, feel, smell, walk, have sex, love. The word ecology calls for consistency with our individual pursuit for the “Turning Point.” How many chances do we have?? What is evolution? What happens after death? What is the meaning of LIFE? How can we better care for the natural resources that sustain LIFE? If a living species goes extinct, what does that mean? What is the planet’s limit? WELL-come, NEW PARADIGM!!