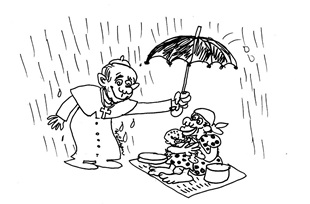 I deny the belief that a politician, even the sweetest politician, possesses any moral sense.

Today, people prefer that you cuss their mother out rather than call them a reactionary.

I am a reactionary. My reaction is against everything that’s not worth a damn.

In many cases, to be angry about underdevelopment is professional. Some die of starvation, others live off of it, in generous abundance.

In the old days, silence was for imbeciles; and today, the very best of individuals are the first to go mute. Shouting, over emphasis, arm gestures, and clenched fists are all used by the idiots of both sexes.

Can our country’s bourgeoisie possibly get any more Marxist!? And I’m not just talking about the upper middle class. Everywhere we go we bump into or stumble on Marxists. No doubt some tourist passing through just wrote in his travel journal, ‘there are 100 million Marxists in Brazil.’

D. Helder Câmara only looks at the heavens to see whether or not he should carry an umbrella.

Today the priest driven protest movement is an order just as defined and characterized as that of the Benedictines, the Franciscans, the Dominicans or any other.

The biggest disgrace of democracy is that it brings out the numerical strength of idiots, which comprises the majority of humanity.

Ah, our country’s libertarians! I know them well, I know them well. They want their own freedom! –Not the freedom of others. To hell with other people’s freedom. They cause uproar against all forced regimes, while each of them has their dictator folded neatly in their pockets.

Man is only happy with the superfluous. In communism, you are only allowed the essentials. What an abominable and ridiculous idea!

Freedom is more important than bread.

Nothing is more cretinous and cretin-producing than a passion for politics. It is the only passion there is without grandeur, the only one capable of making imbeciles of men.

If the facts are against me, then that’s just too bad for the facts.

All unanimity is dumb. Anyone who thinks with unanimity does not need to think at all.

We are passionate about soccer because it is played by the poor human being.

Every Brazilian, alive or dead, has been a Flamengo at one moment, for one day.

If Euclides da Cunha were alive he would prefer to use the Flamengo team over the Canudos for telling the story of the Brazilian people.

Often times it is a lack of character that is the deciding factor in a play. Good sentiments don’t make literature, politics or soccer…

It is assumed that all joys look alike. But the truth is that the ruby red-black joy isn’t like any other. I don’t know if it is deep, more afflicted, or more holy. I just know that it’s different…

The Flamengo have more cheers, the Fluminense have more people!

Other teams are great, the Fluminense are huge.

I tell you that the Fluminense is the best team there is. You might say that the facts speak against that, to which I say: too bad for the facts.

If the Fluminense played in heaven, I would die to see them play.

You can spot a Tricolor among thousands, millions. He is distinguished from the rest by a specific and mesmerizing radiance.

The numeric expression of a cheer alone isn’t worth the effort. It lives and influences in the destiny of battles by force of sentiment. And Tricolor cheers yield an imperishable ensign of passion.

To be Tricolor is not a matter of taste or choice, but a metaphysically geared occurrence, a cosmic arrangement to which one cannot—even if he wanted to—steer away from.

If you want to know the future of the Fluminense, look to their past. The Tricolor history translates to predestination for glory.

The Great War was just a landscape, just the background of our straggling. While one world was dying and another beginning, I only looked on the Fluminense.

The Fluminense were born with the vocation for eternity… everything passes … only the Tricolor will never fade away.

I am Tricolor, I have always been Tricolor. I would say that I was a Fluminense in a past life, long before my present incarnation.

In everyday situations, a charming supporter will just stay home fanning himself with the TV channel guide. But when the Fluminense need numbers, a gentle miracle occurs: the alive, sick and dead Tricolors alike all show up. The living out of their homes, the sick from their beds and the dead from their graves.