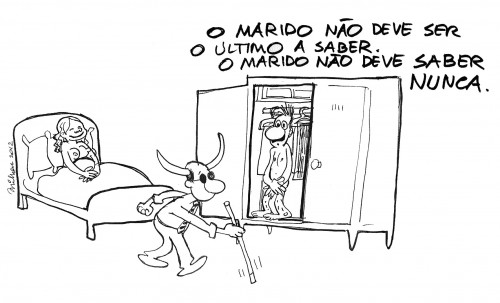 In a marriage, importance should not be put on the wife, but on the mother in-law. A wife is bound to repeat the qualities and flaws of her own mother.

Distrust the lovable, cordial and gentle wife.  Such virtue is sad, sour and neurasthenic.

The love between husband and wife is a thick muddle. It is abject of a man to desire the mother of his own children.

The great experiences of living together are a millimeter away from boredom.

Only cynicism can redeem a marriage. It takes a lot of cynicism for a couple to reach their silver anniversary.

Money can even buy true love.

Every beautiful woman carries within herself, as a lesion of the soul, resentfulness. This resentment is against themselves.

For a woman, a child is a transformation. Even a cretin improves after having a child.

For women, certain ages are, shall we say, an extremely effective aphrodisiac. For example, -14 years old!

A true fine-grain has the aridness of three deserts.

Every beautiful woman is a lesbian girlfriend to herself.

In ‘interesting’ women, beauty is secondary, irrelevant and even undesirable. Beauty is interesting in the first two weeks, and then dies out in an unbearable visual tedium. It would be constructive if from woman to woman someone announced: ‘Being beautiful doesn’t matter. Be interesting!’

There is no family without adultery.

The adulteress is the purest because she is saved from the desire rotting within her.

Everything passes, except the adulteress. In bars and funerals, on the corners and in the pharmacies, there is always someone talking about cheating women. No one cares to hear about successful loves.

Not every woman likes a beating, the neurotics react!

Or a woman is stone cold or she bites. Without a good biting love is not possible.

The ideal woman has to be a lady at the table and a whore in bed.

The prostitute only goes crazy on exception. It is the honest woman that is devoured by her own scruples, held always on the edge, in an unforgiving border.

The bikini is a nudity worse than nudity itself.