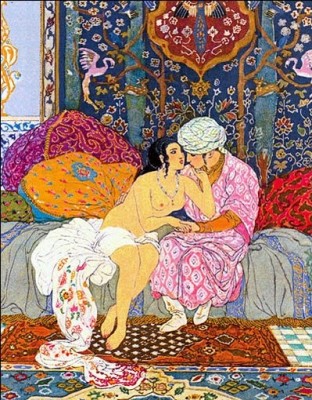 The focus of this article is not on the murderer, the rapist, or the torturer. The daily news already speaks plenty of these characters and they are adequately covered by the Brazillian penal code. There are men who practice a more subtle, more intelligent kind of violence which does not leave scars upon the body but in the person’s interior being, invisible, impalpable, yet often very painful.

It is not unusual for the young woman, in search of the great love of her life, the one who she will marry and raise children with, to find men who speak the language that touches the heart. Men that within a few weeks or months of being together already start talking about marriage or are in a hurry to get married, want to have kids as soon as possible. In view of so many slippery young men who flee from commitment, who just want to ‘be’, men so eager and willing to have a serious commitment seem to be a rare and precious find.

While during the first stages of the relationship, small signs appear. These eager men of prompt commitment are usually the jealous type, sometimes very jealous and possessive. They are in control of everything that their beloved does, where she goes, with whom she meets. They call frequently wanting a report, talk at length about the importance of fidelity, of living for each other, of keeping away from bad company. They do not want their other half to receive anymore bad advice or poor examples from her friends. Wanting her to distance herself from her family because now she will have her own family, her own children and needs to distance herself from her original family because it’s time to develop her independency, to trust him, her lover, fiancé and future husband and get away from all of these harmful influences.

It is not unusual to start cultivating in the lover’s or fiancé’s mind the idea that it isn’t necessary for her to work, that he is man enough to support her and the children. If she is still studying, he’ll vigorously keep an eye on her. Nothing is worse than a school atmosphere among people of both sexes to sidetrack one’s bride to be from her goodly ways.

If he is cautious enough he can get the fiancé or young wife pregnant so that she will have to abandon her job or studies in order to be a dedicated full time mother. After the pregnancy a new man starts to come around. If before he was zealous, loving, patient, dedicated, sometimes humble and pleading, wanting the girlfriend or wife’s time, attention and affection, now at this point he starts to relax. He gets home at a later hour, spends more time with friends, and is more impatient with the wife.  After the birth of the child he relaxes even more. A woman with a new born is a woman that is very tied down, doesn’t offer any big dangers, is very unenviable and has little mobility. The sweet and devoted boyfriend or husband will become arrogant, orders around, is cross, argues, imposes his wishes, wants to be served, doesn’t help take care of the child, makes up excuses more and more frequently for why he gets home late, claims to get held up at work or just simply says he was out with friends, because that’s what guys need.

Many a time I’ve heard wives say: ‘He’s married but wants to have the single’s life.’ Taking care of a baby, without a career, away from friends and family, the woman is in a hostage situation. She cries in silence, becomes bitter and tries to dedicate herself to the child, to get her main happiness out of her maternity. In time the child grows a little more and she starts to think about getting back to her studies or career. He gets in the way as much as possible, gets angry and starts to want another child. If they had a girl, now he wants a boy and vice versa. He claims that an only child is finicky and problematic. Insists, insists until the woman gives in because they generally like to be mothers and think that a pair is better than an only child. With a new baby at home the husband rests easy. ‘Now it’s harder for her to get away’. The marriage goes steadily downhill from there on.

After the two children have grown up a bit she starts talking about separation, although she usually doesn’t have any place to go. Often the woman’s family of origin does not want to have her back with two or three children and no income to boot. Since she is an undergraduate, if she starts working again she won’t make much and doesn’t have anyone to stay with the kids for her, or they go uncared for. A lot of times the couple maintains the marriage in order to not harm the children. She accepts to ‘serve’ her husband sexually, because she has already lost all genuine interest in him after so many years of suffering and deception. When she denies him sexually, violent fights ensue either verbally or physically. He accuses her of adultery. ‘If you do not want me it’s because you’re with someone else’. Some men even threaten: ‘If you leave me I will kill you and your family’. Many conform to, shut up and carry on.

With other not so ferocious men, when the woman separates and goes to live with her parents, the pestering and harassments become intense. He cries, says he’s sorry, ask for forgiveness on his knees, says he will change, that he wants another chance, that he didn’t know how to appreciate her, that he can’t live without her, that he’ll commit suicide. For weeks or month on end they stalk around nonstop, do not make a truce, and endlessly pursue wanting to talk. Many women at this point in the sweet illusion that they’ll have a better husband since he’s recognized his mistakes in public and with so much feeling, go back to live with him thinking that it will all pan out, that they’ll be happy.

For a few weeks or months he gets better and little by little everything goes back to normal, or it gets worse than before because the man wants revenge for having to humiliate himself so much to get her back. If he is really smart he’ll get her pregnant while still in the ‘goody-little-two-shoes’ period, trying to convince her that he is a new man and that a child will bring the couple together in a new chapter of their lives.

The outcome of this type of marriage is variable. The woman will sometimes become depressed and addicted to psychiatric medication, or other times will develop serious bodily illnesses. Sometimes she manages to separate and reconstruct her life with another man or after separation solely lives to be a mother, fearful of men in general.

To marry and have children with a man like this is not by fate. It is a choice. It is imprudence. It’s necessary to live a long time with someone before deciding to marry and have children. A woman who wishes to be in charge of her own life needs to be wary to not let herself be seduced by the masculine rush to get married with children. Have a profession, study the maximum in order to have a sufficient income, never renounce your own career in favor of your husband and kids and keep close ties with friends and family. Don’t go into isolation. Have a support network that can help you think and give you a place to hang low if necessary. Never renounce the dream of living a great love, be demanding, don’t stay with a man full of flaws out of fear of being alone. If a lonely love life is bad it is still only a purgatory. Getting married and having children with a bad husband is hell on Earth. We needn’t go through this.