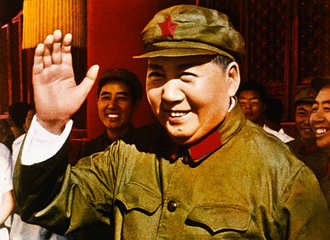 The atom bomb is a paper tiger which the United States reactionaries use to scare people, as was in the old times when China used paper tigers to frighten children.

Living does not consist in breathing, but in doing.

An action should not be by reaction and yes by creation.

The complaint should be made in time to correct the action; one shouldn’t leave criticism for after the consummation of the facts. This is a severe form of opportunism.

Politics is war without bloodshed, while war is politics with bloodshed.

Policy and tactics are the life of the Party

There exist two basic types of contradiction: antagonistic contradictions and non-antagonistic. The first are resolved by violence, where the stronger defeat the weak. The latter can be resolved through democratic methods.

The army and the people must unite with the same basic principle of respect. An army that is valued and respected by the people is an invincible force.

To learn to serve the people with all your heart is the first lesson of our comrades.

Political power grows out of the barrel of a gun. It is necessary to take up the gun so that one day there are no more guns. We make war in order to conquer peace!

Be resolute, do not be afraid of making sacrifices, abandon your illusions, and overcome all difficulties! Darkness is transitory; our inner sun will soon shine!

Democracy and honesty play an important role in the political and military reform. Liberalism consists of the petty bourgeoisie’s individualistic aversion to discipline and which conducts always to corruption.